Parents guide to choking or gagging in babies and toddlers 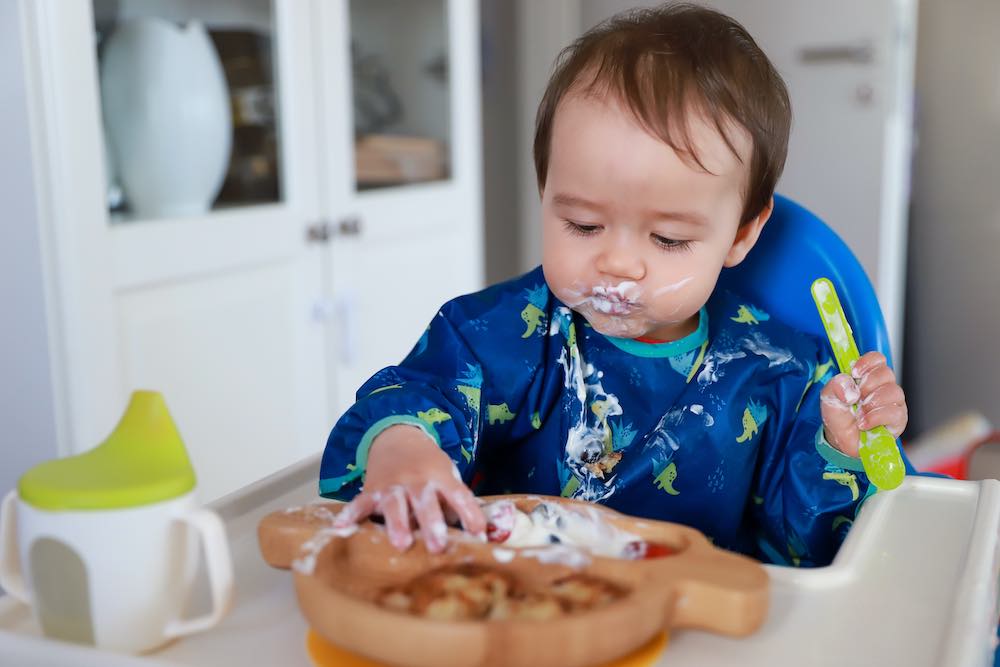 Transitioning from a milk diet to solids can often be a scary time for parents. That’s because with visions of their little ones choking or gagging on their food, parents can become quite anxious at mealtimes. So it’s important that parents understand the differences between gagging and choking, as well as what to do if this occurs during weaning.

Gagging is normal when weaning

When a parent sees their baby’s face turning red and they are spluttering, coughing or gagging over their food, they usually go into instant panic mode! In the vast majority of cases, however, your little one will resolve the problem on their own, so there’s no need to do anything at all.

What’s happened is that their gag reflex has been triggered by their either food, fingers or spoon touching the middle or back of their tongue, throat or roof of their mouth. This gag reflex is positioned much further forward in babies than in children and adults, so it’s easier to trigger when eating. At about 6 months of age, however, this gag reflex starts to move further back in their mouths, so it isn’t as easy to trigger and the problem happens less often. So when you see your baby gagging, it’s because they have triggered this reflex and spitting out the food or removing their fingers or spoon should resolve the problem.

Some babies can also vomit when eating but this isn’t because they are ill or there is something wrong with their food, but simply as a result of a strong gag reflex. If this happens to your little one, it’s very likely that once they have stopped gagging and vomiting, they will carry on eating as if nothing has happened!

Choking is very different to gagging

Choking, however, is very different to gagging and is where a piece of food has blocked their airway. Your little one may start to turn blue and instead of making gagging noises will become very quiet, because their airway is blocked and they can’t make any sounds. This can be a life-threatening situation, which is why learning first aid is important for all parents.

If you can see the object that’s blocking their airway, then remove it, otherwise, don’t try to find it because you can push it further back and make the situation worse. So if it can’t be easily seen and removed, but your baby is coughing (which means it’s a partial obstruction), then lean them forward and hopefully the food will be ejected. If this doesn’t work or your baby is not coughing (meaning that it’s a complete obstruction), call 000 immediately.

Once you have called emergency services, place your baby across your lap with their head down and using the heel of your hand, give a short blow between their shoulder blades.  Immediately check to see if the food has been ejected, and if not, repeat no more than five times, checking between each short blow. If this hasn’t removed the obstruction, you need to perform chest compressions using two fingers, checking to see if the obstruction has been removed between each single compression (no more than five compressions).

If the obstruction is still in place, alternate the five back blows with the five chest compressions, checking as described above, until the obstruction is ejected. However, you must start CPR if your baby loses consciousness; the paramedics will take over when they arrive. As you can appreciate, learning CPR and how to handle a baby that is choking is essential for all parents.

Here are some links to first aid courses.

Safe eating practices for your baby

To minimise the problem of gagging or choking, always sit your baby upright at mealtimes and minimise choking hazards like not giving them whole grapes (simply cut in half or quarter). Never leave them on their own when they are eating, because if they start choking you won’t be there to help them.

Another safe eating practice is to transition from smooth purees to introducing finger food, rather than chunky purees. That’s because babies learn to feed by sucking the puree into their mouth and if it’s a lumpy puree, these lumps can be sucked backwards and trigger their gag reflex.  This leads parents to believe that their baby is having trouble with the lumpy puree (which they are!) and are not ready for finger food (which isn’t true!).

Transitioning from smooth purees to finger food helps your baby learn how to move food around their mouth with their tongue, which allows them to manage the lumpy purees with more confidence. One last tip is to check your baby’s cheeks for food when they have finished eating, because chunky food often becomes stuck between their gums and cheeks (because they don’t know how to use their tongue to remove the food). Removing this food prevents it from being dislodged when they lie down, which can lead to gagging or choking.