I hate to be the bearer of bad news but in most cases this isn’t true. Unless your child is not getting enough to eat from their milk intake (which is very uncommon) introducing solids at 4 months won’t make any difference to their sleep and could actually cause them tummy troubles, make sleeping worse and ultimately effect both your milk supply (if breastfeeding) and their required milk intake.

Many decades ago mums were encouraged to introduce solids at 6 weeks of age (crazy right!)  Then in the early 2000’s the recommendation given to parents was 4 months.  In 2003 the World Health Organisation (WHO) called for the exclusive breastfeeding guidelines to extend to the first 6 months of life.

This 6 month recommendation remains current via the World Health Organisation and Australian Dietary guidelines however; there has been a noticeable trend over the last few years back towards the 4-month mark. The current WHO recommendation states:

“When your infant is ready, at around 6 months, but not before 4 months, start to introduce a variety of solid foods, starting with iron rich foods, while continuing breastfeeding.”

While the introduction of solids is considered safe at 4 months, it is not considered optimal (this is important).

If you are considering giving solids early ie at 4 months then please speak to your GP or health professional first rather than take the advice of a well meaning (but often-uninformed) friend or family member. I see too many mums introducing solids at 4 months in the hope to get more sleep, which in most cases doesn’t work, as the child isn’t hungry. The most common reason I see preventing children having restorative sleep is related to the fact that they aren’t able to settle themselves.

Why should you wait until 6 months to introduce solids?

Most healthy, full-term infants start life with enough iron stores in their blood and continue to receive their iron requirements through breast milk (or formula).  Around 6 months of age babies can require increased nutrients (particularly iron and zinc) for energy and growth and this can be sought from nutritious food in conjunction with breast milk (or formula). I recommend continuing to give milk feeds before solids (approx. 1 hour) up until 9 months of age.

First tastes: sweet potato, pumpkin, butternut, carrots, avocado, pear, apple, banana are all great foods to try first.  Foods high in iron including iron-enriched cereals (I prefer brown rice cereal – recipe below) or iron-containing foods such as pureed meat, poultry and fish can all be introduced from 6 months.

My Brown Rice Cereal Recipe – Click on the image to view the recipe. 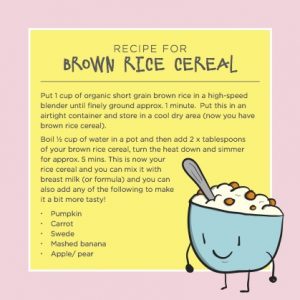 If you would like help with introducing solids, please get in touch by emailing [email protected] or contact me here.